Science with a six-antenna subset of ASKAP with prototype (Mk 1) phased array feeds, or the Boolardy Engineering Development Array (BETA), was conducted during 2014. We observed IC 1459 for a total of 30 h with ASKAP. This integration was divided into three individual observations of ∼10 h carried out on 2014 August 28, September 2 and September 10, respectively. Observations were performed at night. They cover the frequency range 1.223–1.527 GHz. This 304 MHz band is divided into 16,416 contiguous channels of width ∼18.5 kHz, corresponding to ∼3.9 km s−1 for HI at z ∼ 0.

We distributed the nine dual-polarization beams available with ASKAP as shown in the above Figure. This footprint was chosen to include as many known H I systems as possible. The spacing between beams is 0.78◦ (∼70 per cent of the beam FWHM at 1.4 GHz). This is smaller than the ∼1◦ spacing planned for future surveys, which will tile the 5.5◦ × 5.5◦ field of view of ASKAP with 36 beams. The adopted spacing delivers a more uniform noise level across the observed field.

Beams are formed by computing a set of complex weights before the first and the third observation. The second observation uses the same beam weights as the first one. Briefly, for each of the nine beams we position the Sun at the centre of the beam, observe it for 2 min and calculate the complex weights which give the maximum signal-to-noise ratio (S/N) at the beam centre, referenced to a noise measurement with the dish pointing 15◦ south of the Sun. This calculation is performed in 64 1-MHz-wide channels distributed over the 304 MHz bandwidth and unevenly separated by an interval of 4 or 5 MHz. We refer to Hotan et al. (2014) for more details.

Centre image caption: ASKAP H I contours (in turquoise) overlaid on the DSS2-red image of the IC 1459 group. The H I contour level corresponds to a column density of 1020 cm−2 , equivalent to 0.35 Jy beam−1 km s−1 . The circles indicate the position of the nine beams used for this ASKAP BETA observation. They have a diameter of 1.1◦, equal to the FWHM at 1.4 GHz. North is to the right and east is at the top in this image (Serra et al. 2015, MNRAS, 452, 2680). Left and right image caption: H I contours overlaid on optical images of the individual galaxies, together with their H I velocity fields showing the rotating nature of most of the detections.

IC 1459 is a loose galaxy group hosting 10 bright galaxies of mostly late morphological type. It is named after its central, luminous early-type member, which has a distance of 29 Mpc. The group is part of the larger scale Grus cluster – a loose overdensity hosting mostly spirals. A number of additional, fainter galaxies might be associated with IC 1459 based on their recessional velocity. There are 17 galaxies brighter than B ∼ 17 mag and with recessional velocity below 4000 km s−1 within the field of view of our observations. The above Figure shows an image of the group. With the exception of IC 5269A, all galaxies are within ±3 × σgroup from the central early-type IC 1459, where σgroup = 220 kms−1 is the group velocity dispersion. We adopt the same distance of 29 Mpc for all galaxies in the table but note that IC 5269A may be in the background.

The diffuse intragroup medium of IC 1459 is detected in X- rays. This dense medium should create an environment hostile to the survival of H I in the group. Yet IC 1459 is dominated by gas-rich, blue spirals. This suggests that the group may be in a relatively early stage of its assembly. Along the same line, there appear to be kinematically distinct subgroups as the five southernmost galaxies all have recessional velocity below that of the central early type (ESO 406-G40, ESO 406-G42, IC 5273, NGC 7418, NGC 7421). The observation of H I in the group helps clarify to what extent its members are interacting with one another as well as with the group’s gravitational potential and gaseous medium.

Our data reveal the presence of a ∼6 × 108 M⊙ H I cloud in the proximity of NGC 7418 and of two ∼109 M⊙ clouds around IC 5270. The former amounts to ∼13 per cent of the total H I associated with NGC 7418. The two clouds around IC 5270 make up ∼1/3 of the total H I mass associated with this galaxy by low resolution H I observations, and explain the asymmetric Parkes H I spectrum of this object. Based on a comparison between ASKAP and HIPASS data we conclude that the clouds around IC 5270 are the densest clumps of a larger H I distribution below the column density sensitivity of the ASKAP data. We estimate this diffuse gas system to contain ∼109M⊙ of gas in addition to the mass of the two clouds. The cloud around NGC 7418, too, may be part of a larger distribution of low-column-density gas.

The detection of intragroup H I nearby IC 5270 as well as NGC 7418 adds to the body of evidence suggesting significant interaction between galaxies and their environment in the IC 1459 galaxy group. Previous results include the detection of intragroup, low-column- density H I between the early-type IC 1459 and the peculiar NGC 7418A and evidence of ram-pressure stripping in NGC 7421. Altogether, the total mass of H I residing outside galaxies in this group is several times 109 M⊙. This is at least 10 per cent of the H I mass contained inside galaxies in the group. This estimate should be seen as a conservative lower limit because of the limited column density sensitivity of our data. Given that we are observing just a short snapshot in the long assembly history of this particular galaxy group, our estimate implies a substantial flow of H I in and out of group galaxies over a period of several billion years.

Overall, these results demonstrate the good performance of phased-array feeds and give a taste of what the full ASKAP will be able to do on much larger areas of the sky. Considering its larger number of antennas, lower Tsys/η and larger number of simultaneous beams, the full ASKAP will be able to reach the same column-density sensitivity of our 30-h observation (inclusive of the shortest baseline) over a five times larger area of the sky and with twice the angular resolution in just a few hours. Longer integrations over large areas will make it be possible to measure the mass of H I outside galaxies – and firmly establish or rule out evidence of gas accretion and stripping – for thousands of galaxies like the ones studied here. 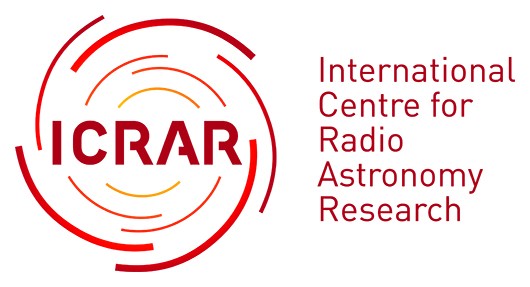